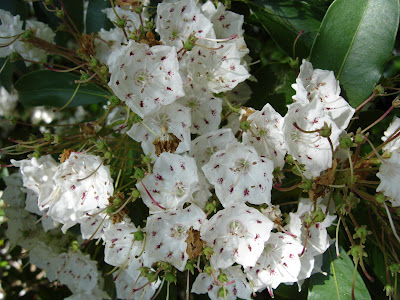 "Can you please stop here?? That looks like mountain laurel blooming and I've never seen it in bloom, only in pictures." I ask Mr. Fix-it while on a sight seeing trip with his parents and the Jimster in the mountains of Tennessee and North Carolina. 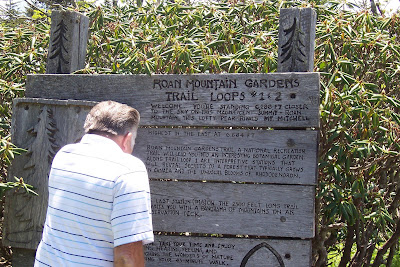 "That's not mountain laurel, that's an 'Ivy Bush'." says father in law.
"Ivy bush?? That can't be ivy, ivy does NOT grow that way and doesn't grow in a bush form. Even if it did, it would not bloom like that!" says an incredulous me.
"Yes! That IS an ivy bush. That is NOT mountain laurel. See over there? That IS a mountain laurel!" states Father-in-law.
I look to where the 'real' laurel was located according to my FIL, and what do I see? A rhododendron.
Hmmmm, I'm thinking to myself. Gee, FIL grew up in the mountains of North Carolina and Tennessee, surely he knows what a rhododendron versus a mountain laurel looks like. Perhaps I am wrong.
"Hey, let's stop and get a few branches so we can identify it later." says I. 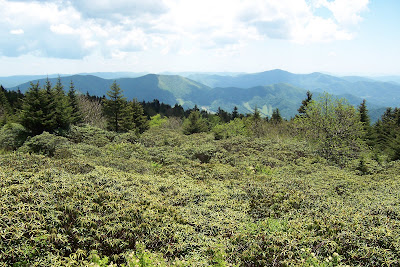 "Oh yes, you are wrong and we'll see that." All the while I can tell my FIL is thinking, "I am right, I am SO right, that white ole bloom is NOT laurel. Tina is wrong."
"Perhaps we can stop at a nursery here in the mountains? Perhaps even that cool little nursery you told me about where the guy has the nursery at his house right in this area?" I ask plaintively, trying to placate my FIL. I am seriously thinking I am wrong and want to have him proved correct.
"Sure. Turn off here Roger. It ain't but 3o minutes away." One hour later after driving on a gravel road thru a precipitous mountain gorge area, we arrive at my father in law's local nursery.
"HE will know for sure. Seeings how he's from around these parts." says rather irate FIL.
"Oops! The gate is closed. No Tuesday hours. Uh oh. Now what do we do?" says I.
Just about that time a nice lady runs out of her house and flags us down. She says, "He'll be back in a little bit! You can wait in my driveway if you like."
"Little bit??? How long IS that in 'mountain talk'? And can we wait?" You can tell I am getting a bit irritated with 'mountain talk'.
"Well I don't know HOW long it is, but it won't hurt to wait a bit."says FIL.
All this time the MIL and Mr. Fix-it were sitting quietly, not adding to the conversation at all. Can't say as I blame them. Now the Jimster, he had no problem trying to referee. In his words he was Switzerland, as in he was neutral and just wanted everyone to get a long.
Turns out a 'little bit' was mere minutes. Over walks this nice looking middle aged man. He peers in the window and I hold up the white flowered branch and ask what is it?
"Why that's mountain laurel. Grows all over the place around here." he replies jovialy. Not realizing he just proved FIL wrong and me right.
Good thing I could not see FIL's face. I am sure it was not a happy face.
I next hold up the 'laurel branch' and ask what is it?
"Why that's rhododendron."
"Hey now wait a minute. Isn't that ivy bush???" Asks FIL, now incredulous himself.
"Yup, the old timers around here call it ivy bush, but it is laurel. And they do call the rhododendron 'laurel'. Not sure why, but they do. But it IS mountain laurel and rhododendron."
Uh huh.
Do you think that is the end of it?
"Nope, it IS still an ivy bush and laurel and who cares about those fancy old names anyhow?" says FIL.
"Well, if you were to go buy one you would need to know the right name in order to get the right plant." I tell him.
"Nah, if I wanted one I'd never buy it, I'd just come up here and dig it or ask my kin for some. They would always get me the right thing when I ask for an ivy bush since it is an ivy bush."
Oh yes, we all have our own regional names for plants and maybe sometimes one can get too hooked on the 'right name'. And anyhow, who am I to say what the right name is anyhow? Obviously the scientific name is what I know as Kalmia latifolia, aka mountain laurel, but it is also known as Ivy bush, calico bush, lambkill, and who knows what else.
There is one thing for sure, no matter what the scientific name is, that ole bush is still an 'ivy bush' according to my FIL. That is fine, I can adapt and thank goodness that matter is settled, at least until the next time. Now what about that blue snowball bush?? That's NOT a hydrangea.:)
in the garden....
I tried to find out why the locals call mountain laurel an ivy bush to no avail. We even called in to a local radio program to ask the public if they knew why locals call the laurel an ivy bush. No luck. When I heard Andrea Wulf talk about the history of gardening, I thought she might have an idea as she is well versed on plant lore. She had no idea why mountain laurel is called an ivy bush either, but did state our first President, George Washington, also called mountain laurel an ivy bush, but she doesn't know why.

Does anyone have any idea what the lore is about this name for the mountain laurel? I have an idea why it is called ivy bush, but it is only a guess and I don't like to do those too often, so if you can set us straight on the history-please let me know either through comments or my email at ramseytina5@gmail.com.Thanks.

I failed to take a picture of the mountain laurel, a very beautiful mountain plant in the same family (Ericaceae) as rhododendrons, but Janet of Queen of Seaford kindly provided me an excellent photo of the laurel and rhododendron. If you've never seen the laurel, you're missing a treat. Just look at how those flowers are cut. They were quite lovely and very different from rhodies. While the laurel was blooming, we were too early to see the rhododendrons in bloom, but the Roan Mountain Botanical Garden was simply splendid even when not in bloom. The first picture shows my venerable FIL reading the sign at Roan Mountain. The second photo is the overlook at the gardens. Everything that does not look like an evergreen Christmas tree is a rhododendron. You can imagine how spectacular that view would be when all are in full bloom!
Posted by tina at 6/11/2009 05:00:00 AM