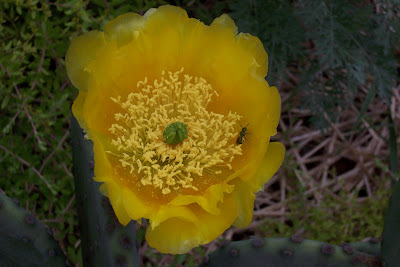 I've had my prickly pears for several years now and just love them. In fact I did a whole post on them my first year of doing this blog. Despite being dug up due to a waterline install, run over by a sleepy driver, and planted in an inhospitable spot practically in asphalt, these prickly pear plants thrive.

I was happy just to have to them live but with all the new growth they've put on I am delighted! So much new growth that for the first time in two years I have blooms! I was in shock because I never expected them to bloom. Why you ask? Because they are growing in a lot of shade and have been abused over the last few years. But just look at this bloom (one of only two)!

This bloom is so yellow and quite a substantial bloom. I enjoyed it very much for the one day it made it's appearance. Now I expect I'll get a purple fruit in its place in a few weeks time. Look closely inside of it and what do you see? (Enlarge for a better view of the pollen and bee) Not only pollen but one of the prickly pears pollinators, the halictid bee (aka sweat bees). I was most happy to see nature at work and making sure this lovely native plant survives and goes on and on.

Mr. Fix-it and the Jimster thought it would be funny to buy some canned prickly pear since I like them so much...in the garden. Yup, there is such a thing. We all gamely tried it and all I can say is yuck! No amount of vinegar will make it palatable in my book, however, if you like seaweed, it might be to your liking. So take a word of warning, it is an acquired taste I think.