What would a Tennessee Blog be without mentioning Elvis at some point? I am currently living in Georgia but I am a Tennessee girl by birth so I am going to take it upon myself to pay tribute to the King. 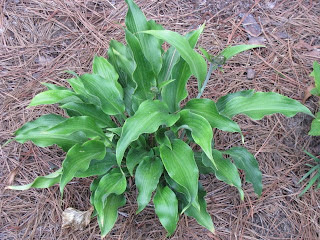 People idolize Elvis from around the world. I do not consider myself a huge Elvis fan but I do enjoy his music and the way in which he gave of himself to others. He gave away hundreds of dollars to total strangers in need. I know he had his faults but don't we all have faults? I wish I had money to give away such as Elvis. In that respect alone, he was a bit of a king in my book.
Jokingly one day, the Saint made a snide remark to my mom about her idolizing Elvis. My mom does not idolize Elvis, but if memory serves me correctly, she was making some type of comment giving Elvis much praise. To get even with the Saint, she purchased him a little tacky Elvis trinket as a gift. The War was on from that day! They now present tacky Elvis trinkets to each other as gifts. The Saints Velvet Elvis painting is priceless! ha ha... 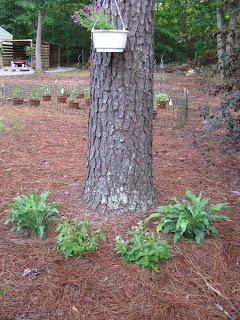 She and dad were visiting with us this past May. One day while the Saint was at work, we took off to Lowe's to look at plants. We came across this beautiful Hosta named... Drum Roll Please..........
"Elvis Lives Plantain Lily" Hosta Elvis Vive!

The name alone got our giggle bone but when she read it has Wavy, tapered leaves of Blue Suede (as in shoes) she just had to get the Saint a couple of the plants!
I planted Elvis along with Pink Dreams Cat Mint. They both are 18" tall at maturity and I think they look pretty together. They both like part shade. They get morning sun but being under a pine tree, they are shaded for the most part.
Then one day I noticed something was wrong with Elvis. Look at the picture and see if you can tell what was happening. Elvis had some missing leaves! Any guesses? 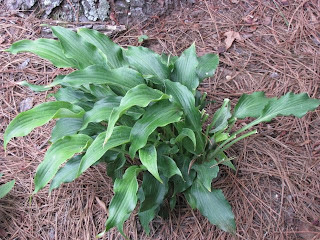 What could have cause the leaves to disappear? Maybe this cute little fawn I spotted bedding down in our yard? 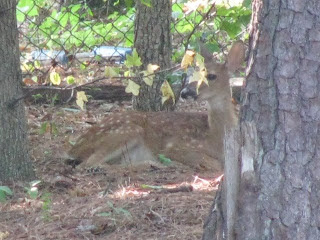 Or could it be these cute little Cotton Tails I spotted nibbling my grass? 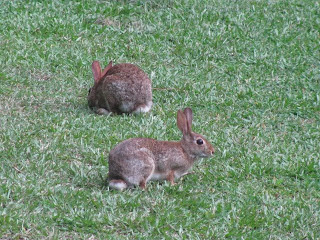 I don't believe we can lay blame on the deer as they would not have stopped with just a few leaves. They would have probably munched the entire plant to the ground!
I knew in time that Peter Cotton tail would continue munching until nothing but roots remain. Once again, another critter dilemma on my hands. That seems to be a normal thing with us living in the middle of a Wildlife haven!
I found sections of connectible fencing and made a nice little barrier between the plants and the mouths of bunny rabbits! So hopefully, they will go elsewhere for treats. In time, I will add more shade plants to this area but not as long as we are in a drought and the ground is hard as a rock! 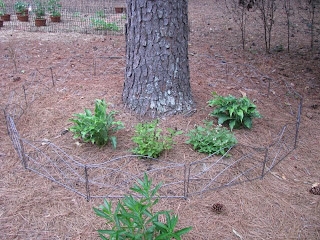 Here was the first bud to arrive. I have snapped a sequence of pictures from Bud to Full Bloom. I dated the pictures so you can watch the beauty unfold before your eyes... 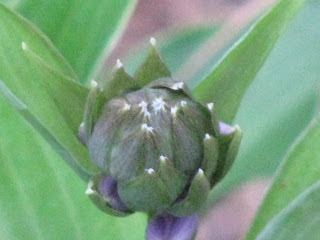 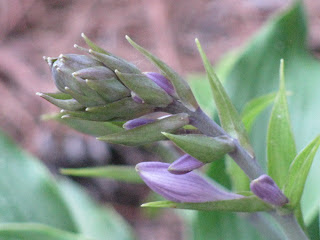 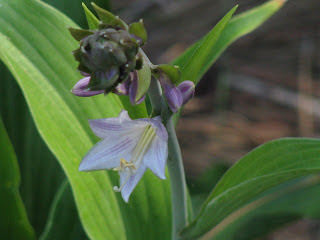 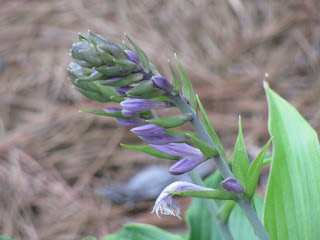 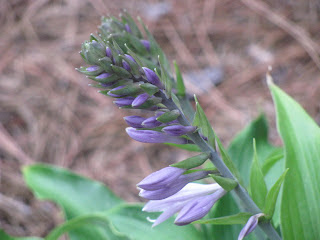 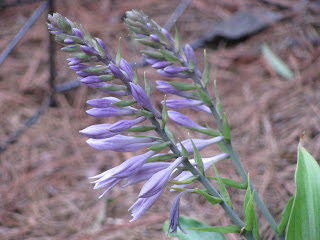 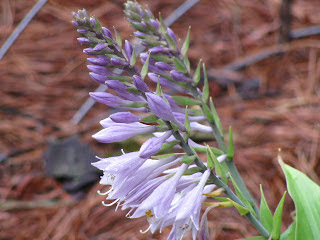 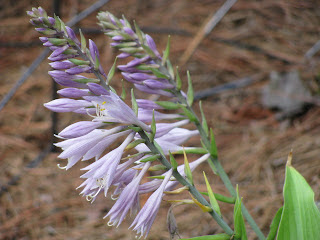 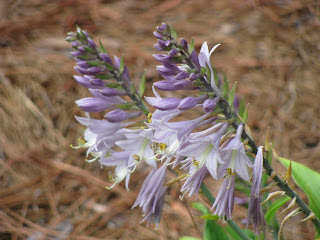 Those pictures were taken of the Elvis Hosta the cotton balls had not munched upon. Today I snapped a picture of the damaged Elvis. It has 6 blooms and is doing well. The other Elvis, has produced 4 more blooms! 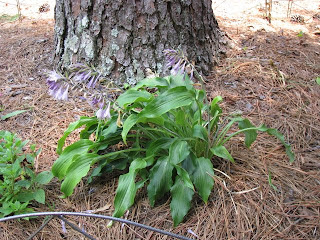 I had 4 Hosta plants in this same spot two years ago. At the end of the season I allowed the critters to munch away the leaf since the foliage was dying out anyway. During the winter, the Vole found the roots and no more hosta the following year! All I have of those beauties are this picture and memories... 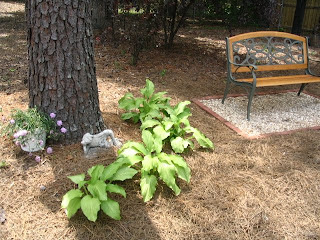 Every now and then, the Elvis War produces some nice items such as this Hosta. But mom, the glass Elvis wind chime was a bit much don't you think? I always say that one day there is going to be some great Elvis stuff on E-Bay but not this latest treasure! Giggle-giggle...