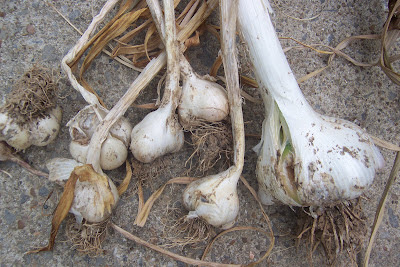 Just a short note from my veggie garden. I have finally harvested all of the garlic. The large garlic above is elephant garlic. It was a delightful surprise and had the bonus of a good flower too. I dug them carefully then stored them on my covered porch for a week or two until they cured completely. They are now ready to eat.

These are a few of my red cabbages. The large head you see made a nice bowl of slaw. The slaw was so good even the Jimster ate it with gusto, though he claimed he did not like cabbage. Funny, he loves sauerkraut and it is no wonder since he was born in Germany and lived there for more than five years.
The way I harvested this cabbage was to use the knife to cut the head out of its cradle of leaves. Once the head was safely in its basket, I pulled the remaining leaves and stem out of the ground and placed it in the compost bin. 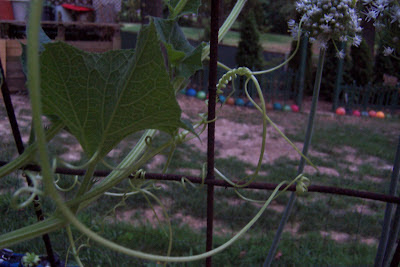 The rest of the veggie garden is growing well, albeit a bit behind most veggie gardens I have seen. I waited a bit late to plant many things, including tomatoes. Happily they are beginning to form now. The gourds are taking over my A-frames, but that is the intent. The above picture shows how the gourd vine attaches itself to the support. I don't have to add any additional support. This one vine has grown about 15 feet in several different directions. I have had to wrap it around and around the A-frame in a S-shape.

I am watering about once a week; which is not bad. Zucchinis are ready for picking, peppers and beans are forming, and the tomatoes are green, but ripening. The coming weeks will see tremendous growth in the garden.... 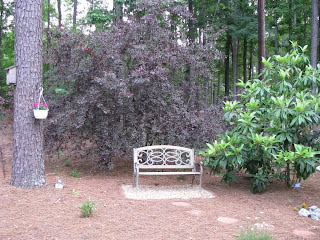 When we moved into this house, we discovered one lone Plum tree. I often sit in front of it on the garden bench. It adorned beautiful blossoms each spring. With each year, the thing has sprouted up many saplings. We dug one up and gave it to the Saints mom and she planted it in her yard in VA. The others have remained where they popped up. This year, the thing exploded with fruit!
The last of the plums have all been picked. The deer and bunny are not happy at all but I no longer see them in this area of the yard. I am so grateful because the flower garden and veggie gardens are on either side of the plum trees! I feared that once the plums were gone, they would start working on blooms and vegetable leaves! 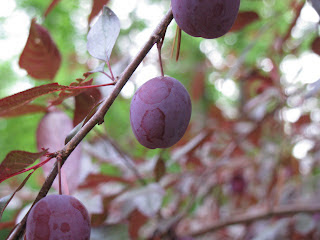 I have no idea what type of plum these are but they are smaller then a golf ball and larger then a cherry. I thought this tree was just an ornamental and the fruit not for eating as it was much smaller in the past years. A neighbor saw them and convinced me to eat them. 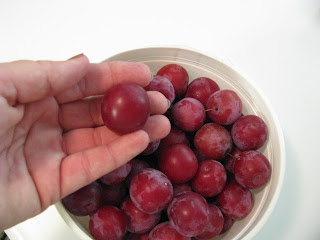 By the time I had decided to try them, the wildlife had taken most of the fruit. This was the only batch we picked. They were a bit too tart in the center for us so I passed them along to a co-worker of the Saints. She loves the things tart or not. Next year, the animals will be fighting me for the fruit!
The Veggie Container Garden no longer exist! 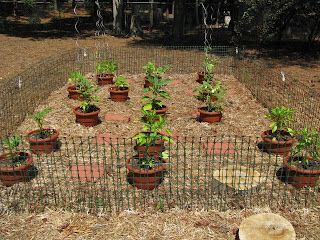 The drought was taking its toll on the plants as well as me. I was watering every day and the plants were yellowing and still thirsty! The containers were drying out way too quickly so I decided to ask the Saint to dig me some holes in the ground. The ground was really dry and hard and a challenge for the Saint. In time, he had the holes dug and I had the plants all in the ground with fresh Kow Compost. I now had an in-ground garden! 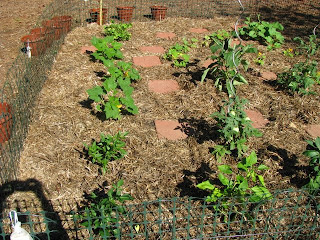 I had put gravel in the bottom of the pots for weight to keep them from blowing over on windy days. When transplanting, I found the roots were growing in the gravel trying to find moisture below, which was not there. I think the pots were a bit too small for the traveling roots. *Make note to self, never add gravel to a pot during a drought period...

Things were really stressed with transplanting during such a hot time of year, plus drought conditions. We lost the Zucchini, Beans, Green Pepper and Gypsy Pepper. We replaced the Zucchini and Green peppers but opt out on the Beans for a Sweet Red Pepper. The Saint was not digging any new holes for me so I had to make do with preexisting holes in the ground.

All the baby Cucumbers fell off the vine except for the largest one. It grew into a strange form. Even the cat did not know what to think of it. She gave it a Cat-Scan but could not decided if it was a Cucumber or Crook-neck Squash! It looked strange but tasted good in a salad. 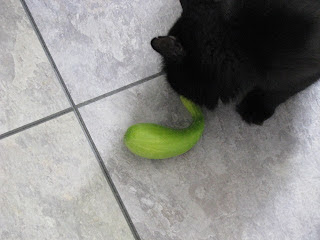 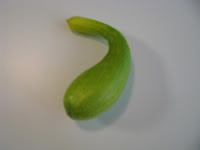 My first attempt at an Egg Plant was now failing. Look at how wilted the poor thing became with stress. It had been giving us tons of blooms so we thought it would produce but after the stress of transplanting it, we knew it was on its way to the compost bin. 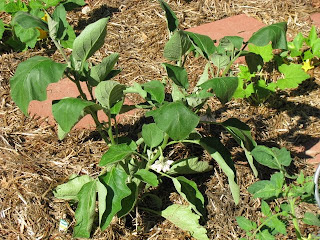 It was so difficult trying to keep the garden watered by hand. The ground was so dry, it was soaking up a lot of the water. We finally set up the water sprinkler to give the entire area a good drink. 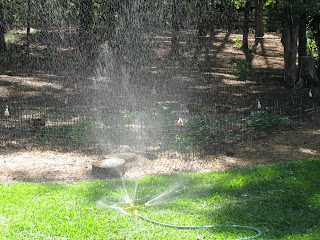 The gourds did not seem to stress during the move. They continued to give me blossoms and produce baby gourds. 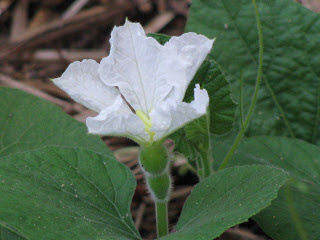 In time, the gourds all fell off the vine just as the Cucumber. How depressing. Sniff-Sniff...

The tomatoes handled the move with little stress. We have been picking and eating tomatoes weekly. 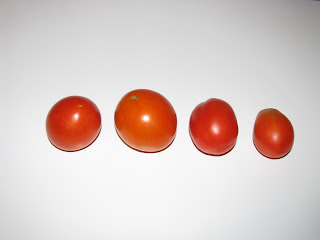 The once prospering Peppers, lost their blooms and babies. We were so depressed and felt like such failures with our Vegetable Garden.

Then it happened... The humidity hit so high that we finally started to get those pop up showers that the Deep South is known for! We had a few nice days of rainfall which seemed enough to turn things around!

One week later; The Hot Peppers are starting to produce... 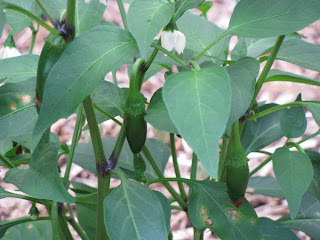 The Sweet Purple Pepper has started to produce... 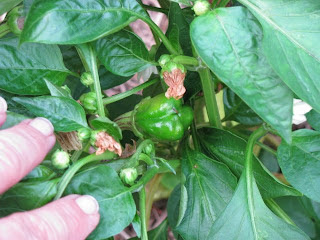 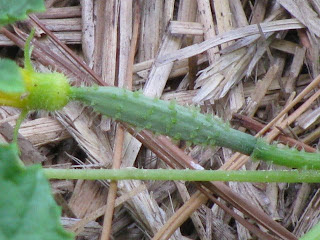 The Egg Plant perked back up and started to bloom again. It had been blooming all along but the blooms would just fall off and no veggie. Or is egg plant a fruit? Hum, never thought of that before....

The purple blooms were so big and pretty, but nothing more. 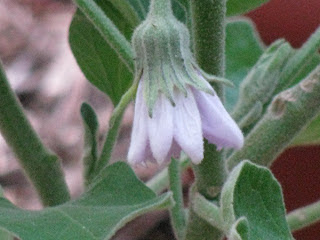 Look what the Saint discovered under a big leaf 6 days ago. A baby egg plant! 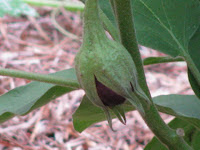 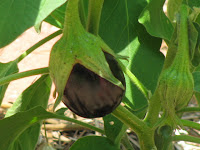 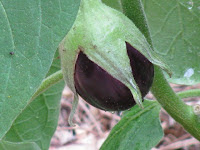 This is the same Egg Plant baby in two day intervals! It is growing quickly along side several siblings. I am soooo happy about this discovery! It appears that DP Nguyen, over at the Square Foot Gardening in Nashville and I will be eating Egg Plant soon!

The Crook-neck Squash had been blooming while in the pots sharing two plants per pot. We separated them and gave them each their own plot in the ground. The blooms would fall off as the egg plant. This continued, once in the ground. We were about to give up on the squash but held on a while longer. I was hoping for something positive to happen. 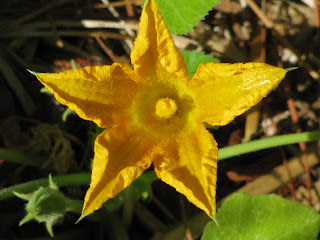 Just look at all those yellow blooms and no Squash from any of them... 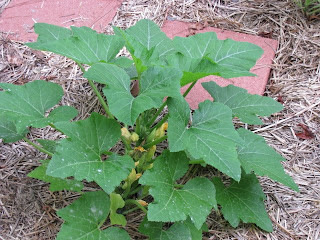 Then look at what I discovered 3 days ago hiding under a big leaf! Yep, one little baby Squash. I hope in time it will have many siblings for us to enjoy... 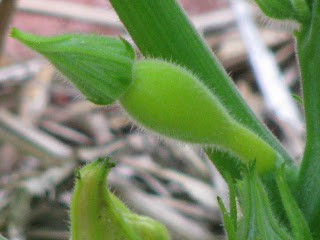 The garden section of our newspaper had a great article last week about how we have a long growing season in our area of Georgia. They went on to say that now is the time to plant for a second Fall Harvest. Guess I did not get the plants in the ground soon enough for a first Summer harvest. I recall a tonsillectomy and soggy ground having something to do with that. Ha... From Soggy to Drought, Go Figure!

We added a new Tomato to the garden as well as the Sweet Peppers and Zucchini. Hopefully they will have plenty of time to produce some goodies for us. 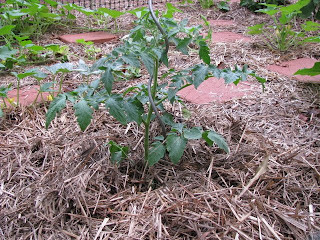 We were failures at Container Gardening but the Veggie garden seems to be making a comeback. The Peppers were just put into the ground on Monday. You can see them to the front of the garden in the picture below. We set up the sprinkler to soak the area since we have not had rainfall in over a week. Other then watering the peppers to get them established, we will only water (deep soaking) weekly or as needed. Hopefully Mother Nature will once again be kind to us and help out.

Eve over at Gardening on the Gulf Coast was talking about a cotton tail getting into her melons. So far the little fencing system we installed is holding its own against the cute little cotton balls. The soap hanging along the fence seems to be deterring the deer as well. Keeping fingers crossed here... 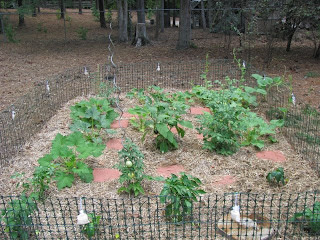 Tina had told me that her portion of this posting would be short. I replied, "so would my part" as it was a depressing time and not much other then death to report. That was a week ago. It is amazing how far this little garden has come with a couple of rainfalls and a week of growth! I ended up with a decent report after all.