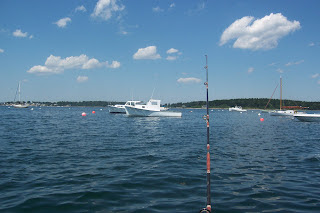 While on leave with Mr. Fix-it recently, we were able to slip in a vacation in sunny, sunny Maine. Can you guess what we also had a chance to do? Hint: See the fishing pole in the foreground? Yes, that is my fishing pole and I so thoroughly enjoyed the pleasant day on the dock with the salty ocean breeze and sturdy lobster boats buzzing around. No, I did not catch anything on this day, but Mr. Fix-it did! He was about to give up but on his first cast he caught two pollack (we think)! The next catch saw him reeling in two mackerel. What fighters they were! 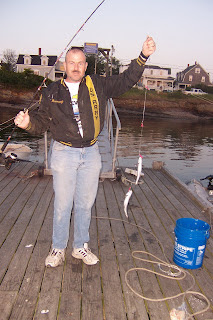 I am not sure part of the whole trip Mr. Fix-it enjoyed most, but those fish were right up there close to the top. He needed a break after working sixty plus hours each week trying to put young people in the Army. Recruiting is a rough job and takes it toll. The trip to Maine was relaxing and enabled us all to enjoy life's little pleasures-like fish and lobsters straight from the ocean! Do you notice the coat? We found the weather a bit chilly at times. What a relief and nice respite from all the heat of the south.

The Jimster got in some good recreation as well. One of his big sisters is a rock climber. The other one white water rafts on kayaks. On this trip the Jimster got to climb a tall rock wall at the local YMCA with is big sister Christine. You all have seen her on here before as she does check in frequently. We could tell just by watching Christine and the Jimster climb the wall that it was tough work! You need lots of upper body strength and strong fingers. The Jimster did find his groove after a few tries and managed to quickly cli 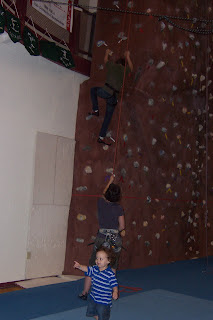 mb to the top of the bunny climb. Is this what they call it? Not sure. Here is a picture of the Jimster climbing with Christine belaying him at the base. As a bonus, my grandson, Josh, was in attendance. That is him in the blue and white striped shirt. He had a great time playing with balls on the soft mat under the rock wall. We really enjoyed seeing him as we had not seen him since he was a mere six weeks old. It is hard when family lives so far away. Visits are rarely long enough and time passes quickly.
Joshua's daddy, my oldest son, was very enthusiastic when he showed us the factory where he works as a manager. We are all quite proud of him because he works very hard and has a lot responsibility at this food factory. Here he is showing Mr. Fix-it and the Jimster how the line runs. The factory where he works makes biscuits and sells them nationally. The company, Gagne Foods, is growing and my son is a key player in the growth of the business. He enjoys his work very much. Don't they all look funny with the fancy hair nets on their hair? I too had one but since I took the picture-you won't see me with one of the nets! 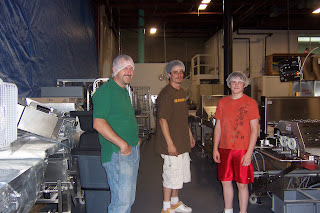 We all had a really good visit with my parents, sisters, multiple nieces and a nephew, two of my children, my grandson and the flora and fauna in Maine (much to the misfortune of a few ocean going school fish). I am going to do a few more posts on Maine having to do with gardening, but wanted to share this little vacation. Maine is known as the 'Vacationland', and it is a truly beautiful state-especially in the summer which is the only time I like to visit! Sorry Mom! Here are a few more pictures from our vacation. 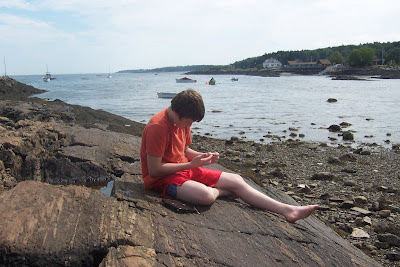 The famous coast of Maine is known as the "Rocky Coast". Can you guess why? Here is the Jimster playing with a snail which bit him on the leg. What a surprise that was to him! The rocky outcropping he is sitting on is called a ledge. The tide was out at this particular beach. When the tide is in this ledge is the perfect jump off point to go swimming. 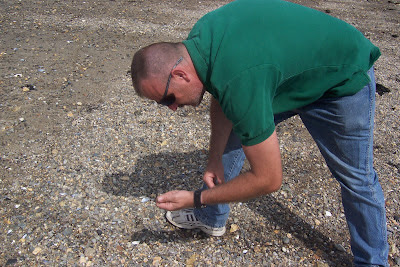 Mr. Fix-it was busy picking up sea glass from this beach. Sea glass is merely broken glass which has been washed up on the beach. It is usually very soft and worn from its time in the ocean. When I was a kid sea glass was a simple thing to find. Now a days it is rare. I think the recycling movement has cut down on the amount of glass that winds up in the ocean, plus, summer is the peak tourist season in Maine and many other beach combers were busy searching for sea glass as well. I am happy to say we did find enough to give to our special friend who watched our house and animals while we were gone. 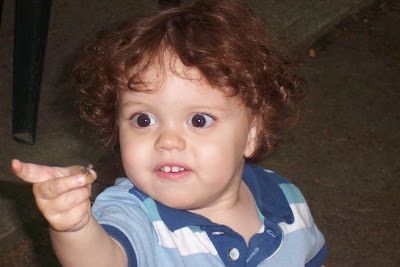 I will leave you all with a picture of my only grandchild. He is the sweetest little boy you will every meet and rarely do you see him without a smile on his face. Here he is a bit befuddled by an acorn he found outside. His auburn curls are so cute and he was a joy to be around during our visit. We only wish we could've visited longer. Anonymous, remember this baby? One of my first posts?