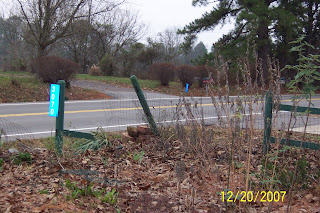 Okay everyone. Good morning! I usually post the first thing in the morning and have my post ready well in advance of posting time. This morning was no different as I have a very nice post prepared and was going to use it. But when I woke up, I woke up to the sound of thumps coming from the road. I went out to investigate and what should I find but that some IDIOT had taken out my fence, then drove off and left all the debris in the road for others to hit.
I know accidents happen and there is no doubt this was accidental. But the person driving the small maroon car had to cross a two foot deep ditch and travel quite a ways off from a STRAIGHT road where the speed limit is ONLY 40 miles per hour. Undoubtedly, he was either sleepy, speeding or drunk-maybe a combination of all three or some other reason I cannot think of right now. Or maybe he was just late to work and couldn't stop to make it right. Time will tell as there is no doubt the culprit will be found with all the evidence there is on the incident.
Fortunately there were two witnesses to the accident and the Sheriff Department had already been notified by one of the witnesses of the incident by the time I called in the report. THANK YOU! It is people like the witness who are willing to get involved in matters like this that make ALL the difference in this world.
While I understand accidents happen, the smart and decent thing to do would have been to knock on my door and inform me of what happened and TAKE RESPONSIBILITY! It certainly should not be my job, time, and expense to fix something he broke, whether accidentally or not. I am sure he will be caught, hopefully he will come forward before that time. This matter can be resolved quite easily if he does. The culprit need only take responsibility.
I know the car suffered quite a bit of damage. It had to have because there are some serious rocks and castle rock which were thrown into the road. Additionally, the fence posts were cemented into the ground. The callousness of not reporting the accident is one thing, but to leave the debris in the road for others to possibly have an accident themselves is unconscienable. I know there are people like this in the world, but I am hopeful and optimistic this person is one of the decent ones and had a good reason for driving off and leaving behind the damage for others to suffer the consequences. One of the witnesses had to stop to move a fence pole out of his way prior to moving on. If he hadn't, who knows who else would have had damage to their vehicle?
The person who hit the fence did not even get out of the car and check the damage. The second picture was taken after I tried to put the pole back in the hole and righted the second pole. It was also taken after I stacked the rocks back up into the wall where they were prior to the person hitting them.
I'm in the garden....fixing all the damage to the yuccas and prickly pear this poor driver caused when he ran into my yard onto my property.
Posted by tina at 12/20/2007 08:19:00 AM