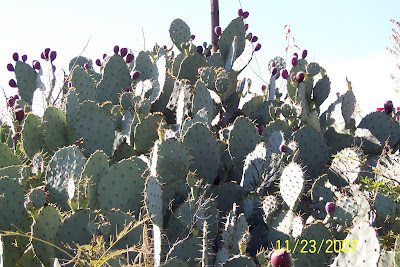 As you all know, I was out of town for Thanksgiving. I was in western North Carolina area for a visit with Mr. Fix-it's family. While there we all went out shopping on the Friday after Thanksgiving. Not sure what you call this Friday. On the way to the big double decker mall I could not help but turn Mr. Fix-it's truck around practically in the middle of the highway to stop and take pictures of this very unique and (I think) beautiful community garden. My mother-in-law and sister-in-law were a bit shocked I got out in the road to snap these pictures. (There were no cars around I promise)
You can tell from the two pictures it is all of what appears to be cactus. It is in fact cactus. The common name is Prickly Pear Cactus and the scientific name is Opuntia humifusa. My Southern Living Garden Book says this is a southern heritage plant and it is native from Canada south to Florida and eastern Texas. 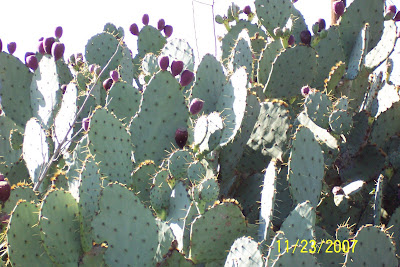 This is a really, really cool plant. I was fortunate to visit a great gardener here on the south side of Clarksville (Lucy) who gave me the prickly pear. My garden club friend (Nancy) set up a visit to Lucy's wonderful garden for Geri, myself and another friend in early spring. It was a gorgeous garden and Lucy is so knowledgeable about so much.
Lucy was reworking some areas of her garden and happened to have just thinned out her prickly pear. She asked us all if we wanted some. Of course you know I had to have some. My friends kindly said,"No way. We will just see how it does for you in your garden Tina." A bit squeamishly I might add. I think the spikes scared them silly. You can see them in the first picture this cactus has some spikes.
I hurried over to where the pile of discarded leaves were and went to pick out some choice samples for my Wal-mart bag when Lucy screamed, "NO! Don't touch it!" Geri got quite a kick out of this and loves telling this story. I jumped about out of my skin because I was not expecting this. I though I had done something wrong. Come to find out Lucy was just protecting me and my bare hands. She approached the cactus with long gloves and an even longer skewer fork to pick up the leaves. She pierced the leaves mercilessly and threw them in triple Wal-mart bags. You see, it is not the big spikes that will get you but the little ones you can't see. Lesson learned. Jimmy has also learned about the little spikes you cannot see, the hard way. I don't know what it is about cactus that makes us want to touch it just to see if we will get pricked.
I had just the place for the cactus-right next to my prickly low maintenance yucca next to the road. Lucy told me to just throw it down and it will root. How right she was! It didn't take long either. I love this stuff.
When my mother came in August the one thing Dawn, my sister, requested was some prickly pear from the beaches in Florida since my mother was heading to Florida to see the other sister after she left my house. I told her don't bother, I would just cut a leaf off from mine and skewer it into a triple Wal-mart bag and she could take it to Dawn. Dawn kindly sent me a picture of her prickly pear and you can see it is doing just fine. She rooted hers differently than I did. I just literally threw mine down and the roots grew out of the side but this cactus is very adaptable and doesn't care how it roots-it just does. Dawn, I think you can safely plant out your prickly pear next spring. It should do fine in Maine.
I have seen this cactus all over town and in a lot of my travels but I am sure I have never seen its fruit. It flowers a lovely yellow flower but then the fruit comes out a dark purple as in the first picture. Isn't it cool? The entire garden in Hickory consisted of nothing but prickly, prickly, PRICKLY pear. If the garden had been next to the restaurant it fronted, a burglar would never stand a chance!
If you grow this cactus make sure it is in a location you and small children or pets will not accidentally run into. I would not plant it near my house that is for sure. It would work as a good deterrent for errant adjacent property owner's dogs and children if desired, along a border in a sunny area. It does do well in part shade as mine grows in mostly shade. I am thinking the pesky deer will not eat it either!
I have some bad news. I saw a dead fox on Dover Road not far from the bypass. I am wondering if it is the same one I almost hit over two weeks ago. Please be careful out there when driving as animals are out in full force looking for food and dashing across busy highways. It is heartbreaking to hit and kill an animal. I have done this only once and will never forget the thumps. So I feel bad for both the dead fox and the person who accidentally hit it.
in the garden....
Posted by tina at 12/12/2007 07:15:00 AM