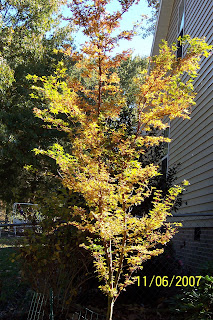 Next to crepe myrtles, Japanese Maples are my favorite small tree. These trees give so much to the landscape and are cherished by so many gardeners. I think the gardeners cherish them so much because they are so expensive. They are expensive because many of the named varieties are grafted and because Japanese maples generally take a long time to grow.

I call this tree Christine's tree. Christine is my oldest daughter and since she has been on her own, she hasn't really lived close to me. Always in another state, except when we were all in Germany. That is why this tree is her tree. She happened to be visiting when I bought this little thing on sale at Home Depot four years ago. She was here for Thanksgiving and I remember this specifically because we had a big Thanksgiving and I was just finishing the last of my raking for the season.


The tree has flourished even in spite of the hard freeze in April. This tree was just beginning to get its fall color when I took the picture, and is backlit by the morning sun. I hope the glow comes through as well in the picture as it did in person. New growth in the spring is a light green leaf edged with red. The leaves slowly darken and turn a pretty much uniform medium green. But new growth continues to come in all season so the tree is never boring. If new growth, fall color and overall beauty were not enough this tree offers up red bark in the winter. Hence the common name of Coral Bark Maple.


Every now and then Christine will ask how her tree is doing (she still lives in Maine) and I let her know it is growing just fine. I had planted two Japanese maples when I planted this one and Christine had reminded me when I told her how this one was doing. The other was a weeping Japanese Maple, which I don't have anywhere in my garden and I love them. My dogs (probably BJ) must have thought the tree was in his way as I found it months later pulled out by the root ball and all dried up. Oh well, Christine's tree is doing okay.


Japanese maples are understory trees and ideally should be protected from the hot sun. I have seen many Japanese maples growing in full sun which do perfectly well, but this is not a smart practice. Japanese maples are native to Japan where their natural growing environment would be somewhat moist, rocky and cool. I have tried to emulate those conditions by planting this tree in a rocky area close to the corner of my house where a gutter drains. Japanese maple roots should not harm foundations but should be planted far enough away from structures so they can mature without having to be pruned. Normally Japanese maples will not need to ever be pruned except for the occasional opening up of the canopy.


Many gardeners lost portions of their Japanese maples in the freeze this year but the fact the trees did not die outright is a testament to their resilience and tenacity. I know I was very fearful my Japanese maples would not return because they were completely blackened. If you did not get a chance to prune out the dead areas, wait until spring leaf out then gently clip out all of the dead branches. They will probably not rejuvenate themselves but new growth will quickly fill in.


A newly trained master gardener and citizen forester, Judie, has trees in honor of most all of her family members in her garden. She loves trees more than me. Shrubs are my big thing. Does anyone else have trees like my Christine tree and Judie's trees? I once heard when a baby is born members of the family plant a tree in honor of the baby. And let's not forget those annual give a way trees by the tree board which come with certificates. Jimmy's little redbud he received in the fourth grade is still growing-albeit slowly.